About: The North Shore

The North Shore is a region in the U.S. state of Massachusetts, loosely defined as the coastal area between Boston and New Hampshire. The region is made up both of a rocky coastline, dotted with marshes and wetlands, as well as several beaches and natural harbors. The North Shore is an important historical, cultural, and economic region of Massachusetts. It contains the cities of Salem, known worldwide as the site of the Salem Witch Trials; and Gloucester, site of Charles Olson’s Maximus Poems, and of Sebastian Junger’s 1997 creative nonfiction book The Perfect Storm and its 2000 film adaptation. Beverly was home to author John Updike until his death.

The region also prominently figures in the works of Nathaniel Hawthorne and H. P. Lovecraft, notably the latter’s The Shadow over Innsmouth, as well as those of many New England poets, from T.S. Eliot to Robert Lowell. Martin Scorsese‘s 2010 feature film Shutter Island, set on a fictional Boston Harbor island, was partly shot on location on the North Shore. Kenneth Lonergan‘s acclaimed 2016 film Manchester by the Sea is set in the eponymous seaside town, and major portions of it were filmed in Gloucester, Beverly and other North Shore communities. 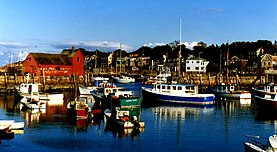 Fishing boats in the harbor of Rockport, Massachusetts.

Whether you are a prospective landlord seeking to rent your property or a prospective tenant searching for a place to live, whether you want to sell your house or buy one, it is extremely important to us at Bay State Realty Group that you understand the process, your rights, and your responsibilities. we want to answer any of your questions and to provide you with simple to understand explanations of your Real Estate transaction.